Nepomuk has a unique problem of maintaining an RDF store. Unlike traditional SQL based stores, RDF offers a very loose schema, which is a HUGE advantage. Unfortunately all of the current RDF stores do not support any form of schema enforcement. It’s up to the client code to make sure that the data being pushed is valid.

This has resulted in a number of problems such as strings being stored where an integer should go.

With the KDE Workspace 4.7 release, we started employing our own form of schema enforcement in the Nepomuk Storage Service, but the old incorrect data still remains. Also, as Nepomuk has evolved as a project, we have found better ways to store data. Since the schemas are so loose, we could easily store both the old and the new data without any problems on the database level. This obviously results in more complex client code which has to handle both legacy and new data.

For this release, we decided to clean up the code to a certain extent and stop supporting some of the legacy data. We also decided to ship a very basic application called the ”Nepomuk Cleaner“. 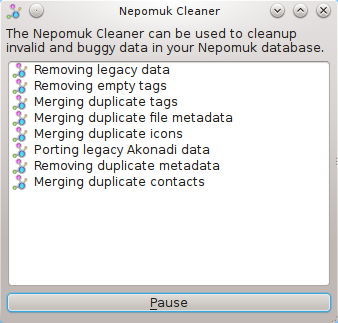 This application is responsible to port any legacy data, clear up incorrect data, and merge duplicate data. We recommend that all users run it at least once. It will result in a performance upgrade of all areas of Nepomuk, including a significant impact in the indexing speed of emails.

With the 4.11 release, we’re planning to improve the interface, add more cleaning jobs, and make running this application mandatory. That way we can safely remove all the legacy code paths.