For those of you who don’t know, I’m currently at Tallinn, Estonia for Akademy 2012.

Here at Akademy, yesterday was an amazing day for Nepomuk. Early morning we had a Nepomuk BOF titled ‘Constructive Criticism - Prioritizing Nepomuk development’, and it was really good. I wasn’t sure if I shouldn’t have named it such, cause that might have ended in people just coming and complaining, but surprisingly everyone was really nice and constructive.

During the start of the sprint, we decided to list down each of the Nepomuk components along with their respective developers. Once that was done, I just explained what we are currently working on, and then ‘request for comments’ period started.

The initial discussion was related to the PIM feeders and how they still regularly cause high cpu spikes. I don’t personally use PIM, and since Christian is that maintainer of that code base, he handled most of the comments. The overall conclusion was that we need to schedule the indexing at a better time. For this, we would need some help from Solid for better idle detection.

After this we started with a discussion of the most user visible application using Nepomuk – Dolphin. For one it should only be showing files, and the listing to the query results should be a lot faster. Maybe even something along the lines of on-demand loading. And finally, we talked about how it is not possible to search through both the file name and content at the same time. 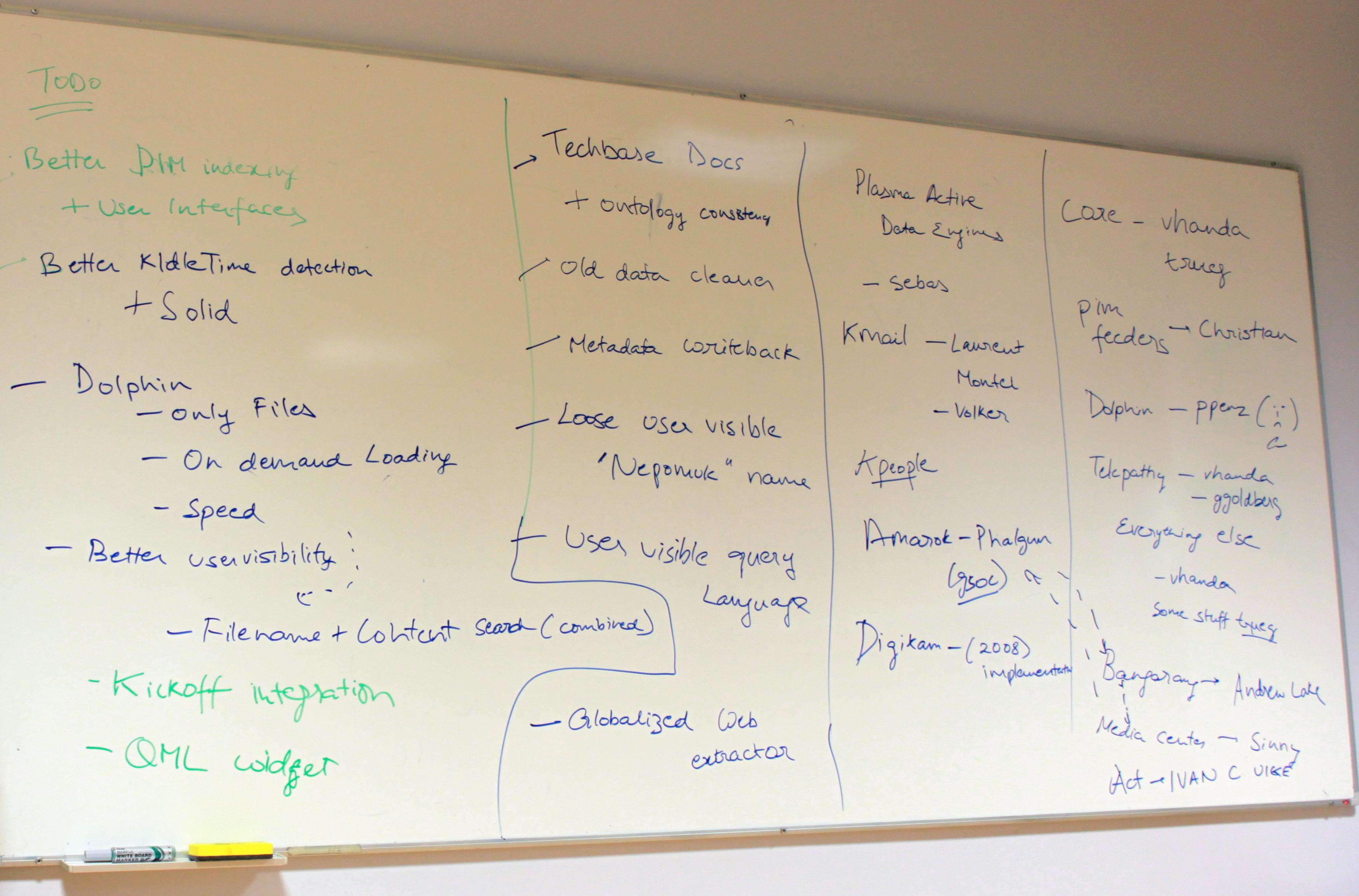 With this discussion we obviously started discussing the current search interfaces. We wanted a separate plasmoid just for searching (something similar to Crystal), but someone mentioned that we already have 2 places for searching in KDE - krunner and kickoff, and both of them do not show the same results, which can be confusing. Marco, from Plasma, mentioned that maybe krunner could be modified to show the search results in a better way. Eventually, we concluded that this is an open discussion which still needs a proper solution.

A couple of other issues that were discussed we better technical documentation, ontologies, old data cleanup and migration. We also discussed shipping meta data writeback, which is the process of writing the Nepomuk Metadata back into files/Akonadi/some other representation.

We then discussed the state of Nepomuk and media players - Amarok, Plasma Media Center, and Bangarang, and how there may be a need for a central library for managing multimedia via Nepomuk.And finally went on to discuss the current state of Digikam and Nepomuk integration which is very old, and needs a lot of work.

And that was it. Well, not quite.

Later during the day, after the Randa sprint, we had an impromptu meeting discussing the state of meta-contacts and its support in both Telepathy and Akonadi. Fortunately, we had all interested parties present - Telepathy and Akonadi developers, and the discussion went on for quite some time. 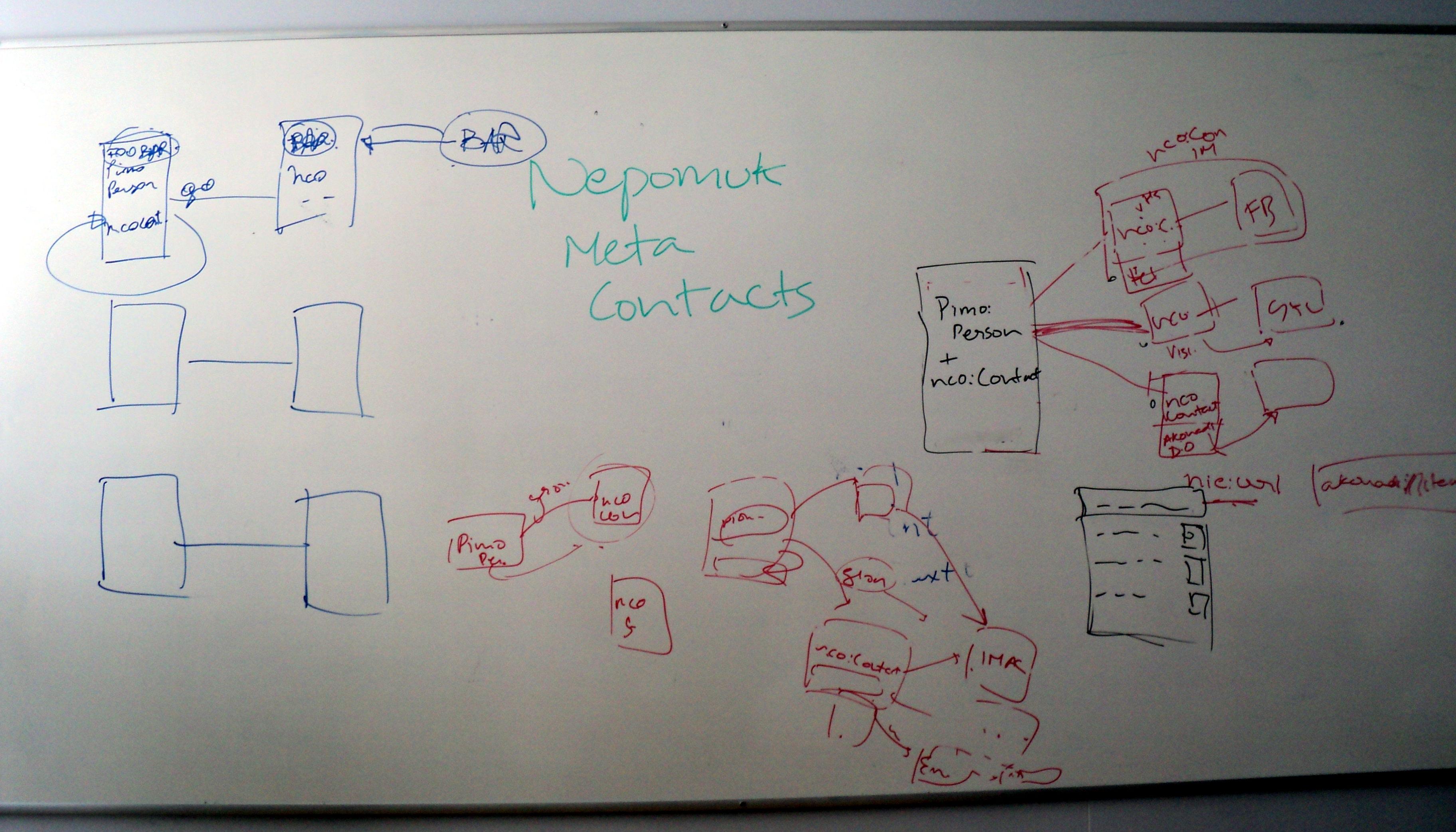 My initial approach for solving meta-contacts using the ontologies had some flaws. Having all the interested developers discuss it out and come to a conclusion was amazing. It’s difficult to get started with implementing proper Nepomuk support for Telepathy if we all cannot decide on how to use the ontologies.

We even went on to discuss semi-automatic contact merging and a lot of stuff related to Telepathy. Overall, a really productive day!