For the last month I’ve been working on a hash table which is stored in shared memory and can thus easily be used across applications. This is ideal for simple caches of data that reside in multiple applications. My specific use case was the Nepomuk Resource class, which is a glorified cache of key value pairs and uses a hash table. A considerable amount of effort has gone into making sure that each application’s Resource classes are consistent with the other applications.

I always thought something this basic would have been implemented, but I just couldn’t find a shared memory hash table which actually supported resizing.

Hashing is arguably one of the most important concepts of computer science. If you aren’t aware of how it works here are some nice links -

When implementing a hash table in shared memory, one encounters a couple of problems which normal hash tables do not have to deal with. Namely ’named memory locations’. In the Unix world each shared memory location has to be given a unique identifier so that it can be accessed by other applications. Because of that we cannot allocate each Node/Bucket independently.

Most hash tables, which handle collisions by chaining look like this

Allocating a new named shared memory region for each node seems like quite an overkill.

Since everything has to fit inside a contiguous memory location, we need to structure the hash table a little differently.

We use two shared memory locations - HashName and HashData. This is done cause a hash table is not fixed in size, and will need to be reallocated. With the reallocations, a new named shared memory will have to be created, and all existing clients would need to be informed to use this newly allocated location which would have a different name.

Instead we use HashName as the unique identifier the client knows about, and HashData is internally used and can be changed when the hash table needs to grow in size.

The additional integer is a micro optimization. Whenever a client needs to use the hash table they need to make sure that they are connected to the appropriate shared memory, and not the old version. The code does that by checking if HashData name is the same as the same as the one provided by HashName. 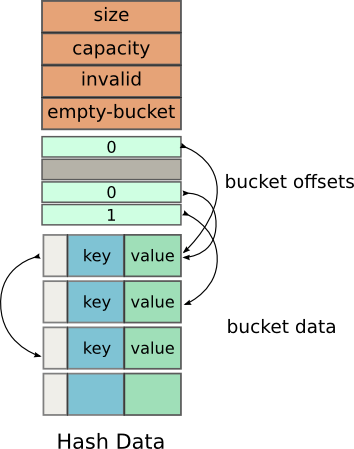 Most of the initial members are quite obvious, but I’m still listing them.

Size: The number of elements in the hash table

Capacity: The total number of elements the hash table can hold

Invalid: The number of buckets that invalid (have been deleted)

Empty-Bucket: The offset of the next empty bucket which may be used for insertion

After this comes the array of offsets referred internally as m_buckets. This array instead of holding the pointers to the Buckets, like in a traditional hash table, it holds offsets from the beginning of the next array.

The next array is an array of Bucket s, which is internally referred to as m_data. This array holds the key value pairs. A typical Bucket is defined as -

The link member is again not a pointer, but it contains the integer offset to the next Bucket from the start of m_data.

Insert operations are quite simple. The key is hashed into an integer, which after a modulo operation is used as the index.

The corresponding index is checked in m_buckets. If m_buckets does not already have some value over there, there is no collision and we just allocate a new Bucket and plug in its offset.

Allocations of new buckets are done by consuming the location given by emptyBucket, and then incrementing its value.

If m_buckets does not have an empty value, we go to the corresponding Bucket, and follow its link until the link is empty. At that point we allocate a new node and make the link point to this new Bucket. This approach is almost identical to that of conventional chaining, except that we are using offsets instead of pointers.

Delete operations are fairly similar to insertions. The index is procured by hashing they key, and performing a modulo operation with the capacity. After which m_buckets is used to get the offset of the actual Bucket. Instead of deleting the bucket, which would not be possible cause it is stored in an array, we simply mark it as invalid.

The number of invalid buckets is then updated, and m_buckets[index] is marked as empty. Later during the resize operation, the wasted memory will be cleaned up.

Note: Deletions are actually a little more complex because of collisions, but you just need to traverse the entire link chain, and mark the corresponding Bucket as invalid

The resize operation occurs when the loadRatio of the hash table goes above a certain threshold. For now, I’ve set it to 0.8.

The invalid buckets are ignored and they are not copied.

Once the copying is completed, the hash data key in HashName is updated, the id is incremented. This is done so that all other applications using the shared memory can update their internal pointers.

Iterating over the hash table is probably the only operation that is a lot simpler than traditional hash tables. We already have all the data listed as an array - m_data. All we need to do is iterate over it while discarding invalid buckets which were created by delete operations.

In practice, safely iterating over a shared hash involves copying the element being accessed. Mainly because another application could have shrunk the entire memory and your index could no longer be valid.

Another possible way is to copy its contents to a QHash. I’ve implemented a simple function for that.

You cannot use any types which dynamically allocate memory as the key or value. This rules out QString, QUrl, QVariant (kinda) and most of the commonly used Qt Data Structures. If you need to use a string as the key, you’ll need to explicitly set an upper limit by using something like QVarLengthArray.

This is a huge problem, and makes using the shared hash very difficult in practice.

All of the code is currently lying in my scratch repository - kde:scratch/vhanda/sharedhash