I land up using wget a lot. I know there are better alternatives, but wget’s simplicity has won me over. Plus, with applications like firefox, I’m not always sure I’ll be able to continue the download. That’s important when I’m downloading big files, but for small files, it really doesn’t matter.

A couple of days back, Martin and I were chatting about storing the metadata of a downloaded file in Nepomuk. I knew it wouldn’t be hard. The ontology is already in place, so it was just a matter of pushing the data into Nepomuk.

I estimated that it would take us around half an hour to code a simple prototype. Yesterday we finally decided to do it.

Yes the name is weird. In fact deciding on the name was the hardest part. The Nepomuk code was just around 30 lines - 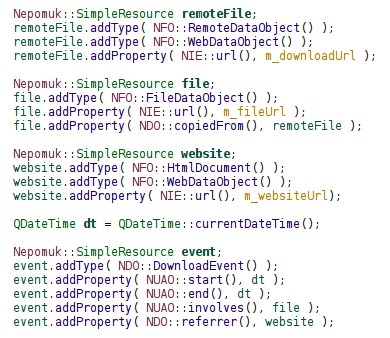 NADM is a simple executable which when presented with the file and download url will attach the corresponding metadata. So, people who prefer commands can just call it after wget, or write a script to do it automatically.

For the people who use Firfox, they can head on to Martin’s blog and look at the cool stuff he implemented.