Anyone reading this post should be warned that I’m really sleepy right now. I have this sudden urge to type about this not so random topic. I am sleepy and you shouldn’t take this post to seriously. I’m just ranting ..

Has anyone ever realized that our Desktops in general are really static. There is nothing about it that changes that often. Okay, maybe the wallpaper. But how often does that happen? For me - It’s about once in 2 weeks and even then I usually change to one of the predefined ones that came along with KDE.

What about the general theme or colour of the windows? Well, once or twice in 6 months. What about you? Do you really change how your desktop looks that often? I’m pretty sure most people don’t. Hell! If they change their wallpaper once a month it’s a big deal. Seriously!

*"Hey! Look at our desktop. We have all these crazy widgets and stuff."*

To be a little more specific, lets look at KDE's Widgets. They are absolutely fab!! So, "super kool", right? I can move them around, resize them, rotate them. All without loosing any quality. Scalable vector graphics are amazing. But how often have I actually done that? Well .. uhm .. I think it would be... Well!  "Used Rarely" is how Microsoft's Add Remove Programs would label it. (Do Microsoft systems still have that?)

My KDE desktop really hasn’t changed much over the months. Who has the time to actually go about looking for amazing widgets, which do all this crazy shit, which don’t really help at the end of the day? This is how it looks right now - 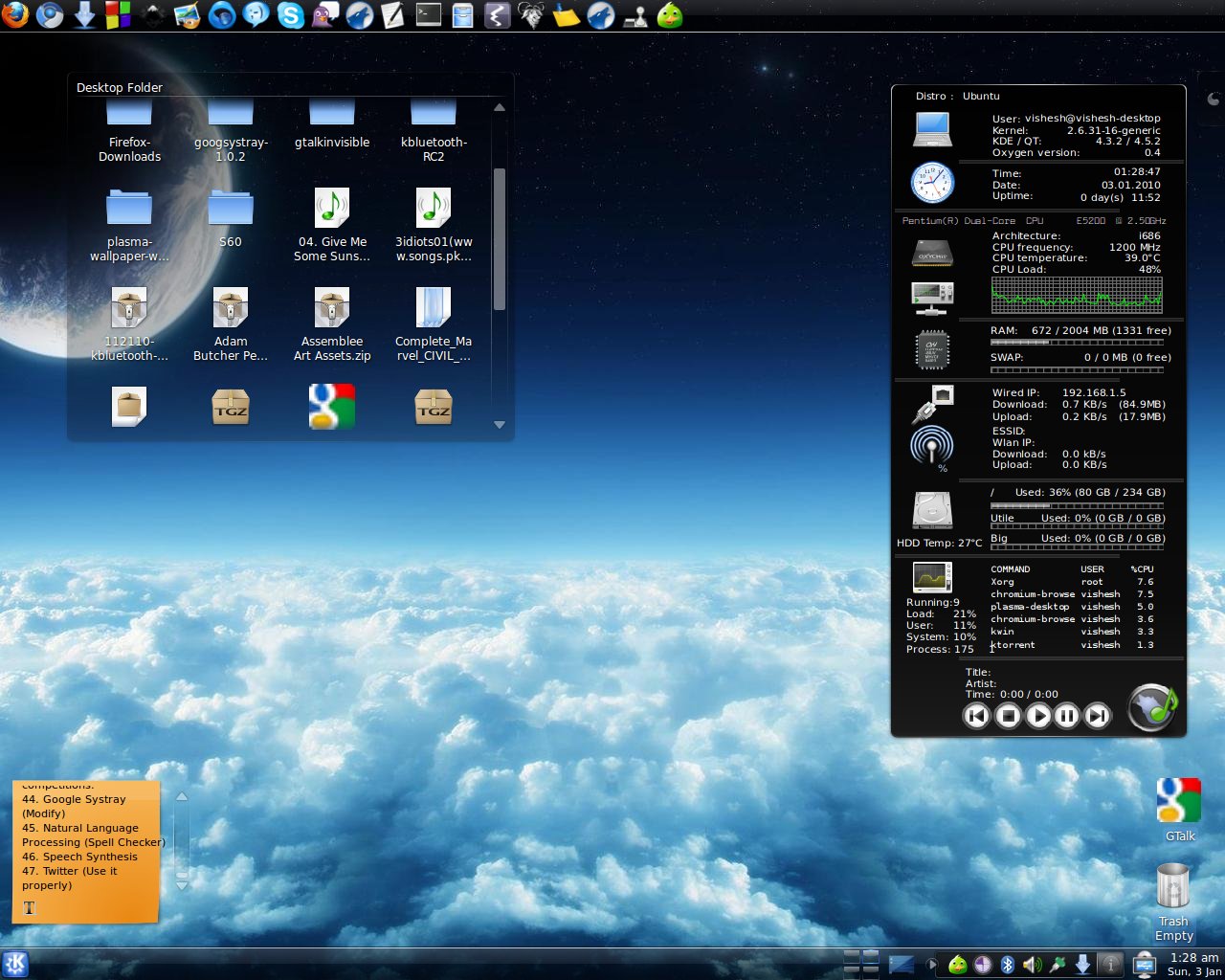 And if I post my desktop again in a couple of months. I’m sure it would have barely changed.

Okay, I’ve drifted off topic. My point is - Generally people have a very static desktop. It barely changes over time. I think it’s time that changed. Now, I don’t mean everyone should go change their wallpaper this second, their entire color scheme, and theme. I think it should change on its own. Periodically. But that’s really difficult. Everyone has distinct tastes, and we painstakingly spend hours looking for an amazing theme. Some of us, actually make them. How the hell would some program know my likes and dislikes?

My answer is - It won’t. But, it sure as hell can know the weather outside. Maybe even your mood, if you tell it. So why can’t our Desktop in general change to reflect our mode or the weather or maybe some holiday?

We’ve got all this procedurally generated content going on,  at least in the field of gaming. Why doesn’t someone generate an algorithm to change the entire look of the computer based on the weather, or just based on some different colours? I’m sure it won’t be that hard. Or is it?

I know KDE has a weather background thingy, where it changes the desktop based on the weather outside. But it sucks! I thought it would cross-reference the weather with random images across the internet, find hundreds of them, randomly pick one and change it as a my background. Or maybe just assign 10 pictures per weather type, and do Google similar images search and randomly choose a background. Instead it just has 20 odd pictures which it keeps reusing. It gets really bland. With a normal wallpaper, you know it’s not going to change unless you change it, and you live with it, but when it can change on its own and it keeps cycling through images, it irritates the crap out of you.

And here is one more thing. I know this is more of a GNOME vs KDE thing, and I know each has its pros and cons, but did the KDE people really have to make it that hard to change the entire look of the desktop? There are Icons, Colours, Window styles and loads of other stuff, and each of them has to be changed individually. I like GNOME’s approach a lot better. Combine all of them, and then provide advanced customization options.